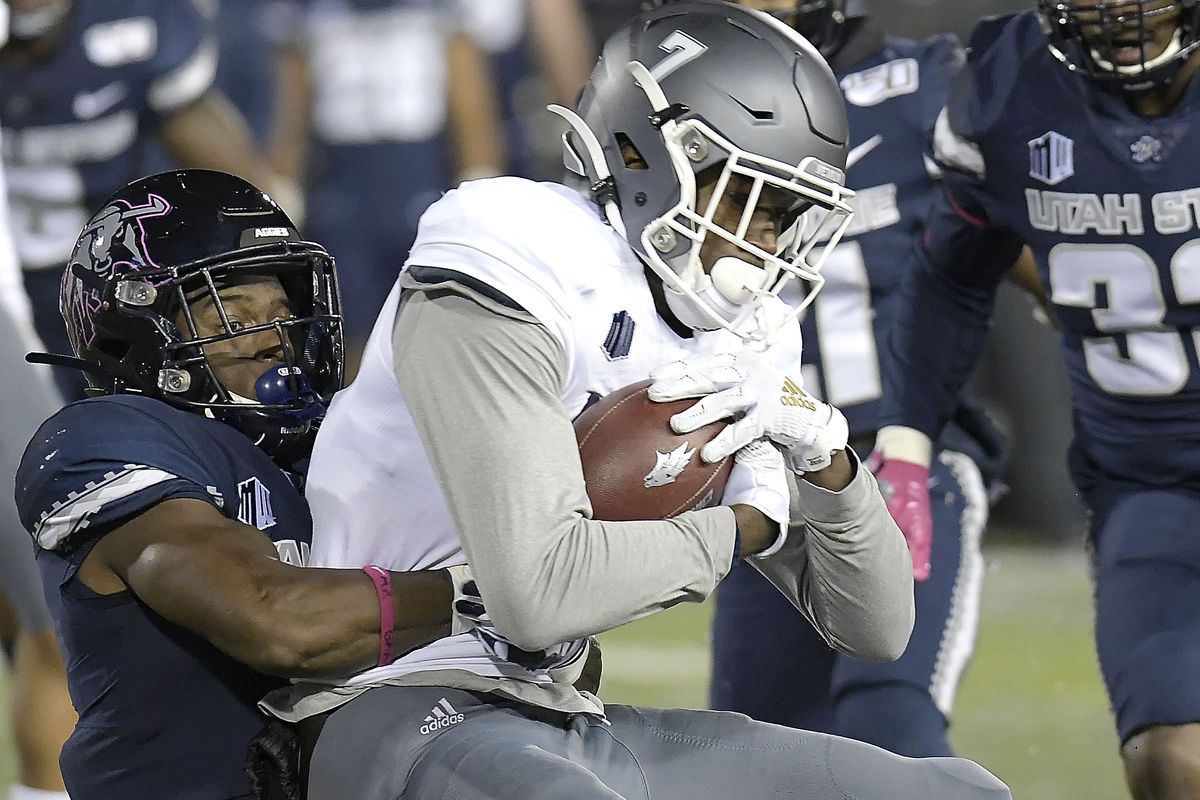 No. 20 Boise State and Utah State are about to engage in a showdown, but nobody’s sure who will be the gunslingers.

The Broncos visit the Aggies in Logan, Utah, on Saturday night with the Mountain West’s Mountain Division lead on the line, and who’ll play quarterback is a question that doesn’t prompt an answer from either side.

Utah State (6-4, 5-1) features an NFL prospect in junior Jordan Love, but he departed last Saturday’s victory over Wyoming with an undisclosed injury.

Aggies coach Gary Andersen had no interest in discussing the subject with reporters.

“No comment. There is nothing to really tell at this point, so we’ll see,” Andersen said.

Love has passed for 2,684 yards and 13 touchdowns but also has thrown 14 interceptions.

If Love can’t play, sophomore Henry Colombi will start the game. He has completed 14 of 18 passes for 143 yards and two touchdowns.

Getting Boise State coach Bryan Harsin to reveal his quarterback injury situation is seldom a success. Harsin professes to talk only about season-ending injuries.

“I’m not really going to go into that,” Harsin said at a press conference, “but we’re further along and (healthier) at all positions and that one as well.”

Bachmeier, a true freshman, has missed three of the past four games — one due to a hip injury and the past two games due to a shoulder ailment.

Cord missed last week’s win over New Mexico after apparently being injured the week before against Wyoming. The sophomore had his passing hand thoroughly examined by trainers in the final minutes of regulation against the Cowboys and was able to finish the game.

Third-stringer Jaylon Henderson drew the start against the Lobos and passed for 292 yards and three touchdowns in the easy 42-9 triumph that improved the Broncos’ record to 9-1, and 6-0 in Mountain West play.

Harsin was impressed with Henderson’s performance.

“You guys all got a chance to see this kid play, and he can throw it,” Harsin said of the fifth-year senior. “He can operate, and he prepares himself. This dude is really good.”

Senior receiver John Hightower has been really good as well and he had four receptions for 124 yards against New Mexico for his fourth 100-yard outing of the season. Hightower has caught 37 passes for 754 yards and six touchdowns.

Boise State’s top defensive player also could be sidelined on Saturday. Junior pass rusher Curtis Weaver injured his right leg against the Lobos. There hasn’t yet been a clarification of what type of injury he suffered.

Weaver has 12.5 sacks this season and holds the Mountain West record of 33.

Utah State won’t be feeling too sorry as it lost star linebacker David Woodward (93 tackles in seven games) for the campaign earlier this season.

Junior safety Shaq Bond has a team-leading three interceptions for the Aggies, who have allowed an average of 38.3 points in their four setbacks.

The shaky defense means the Utah State quarterback — likely Colombi — needs to be ready to put points on the scoreboard.

Andersen has been impressed with the way Colombi has prepared.

“Henry has stayed mentally ready,” Andersen said. “Just watch him in practice. It’s not like he’s just over there watching the birds fly around, the pigeons up on the press box. That’s not what he’s doing. He’s ready.

“He sees it and he understands it, and I think he’s really playing it out in his mind. … Henry understands that those are big shoes to fill when that opportunity presents itself.”

Siaosi Mariner, who played three seasons at Utah before transferring, is the Aggies’ top wideout with 49 catches for 753 yards and seven touchdowns.

Utah State has won eight consecutive conference home games, but this is a series dominated by Boise State. The Broncos notched a 33-24 home win over the Aggies last season to improve their series lead to 18-5.