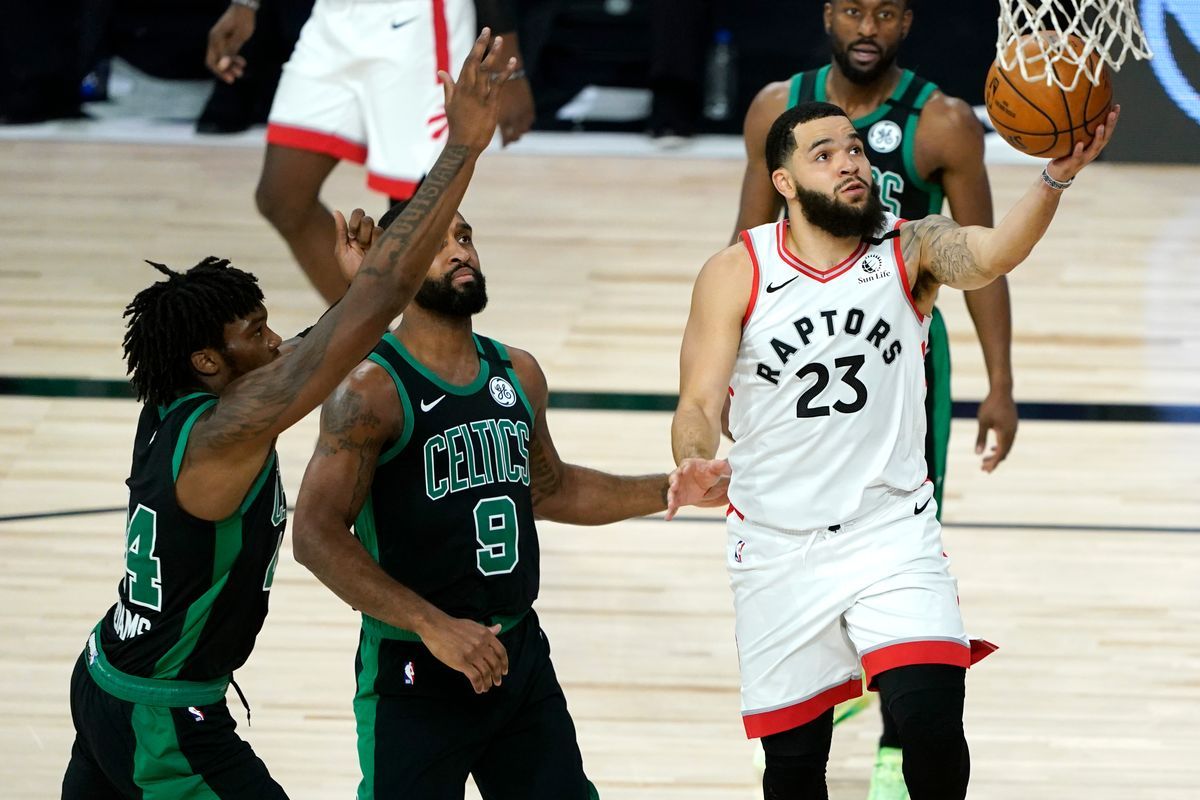 In tying up their Eastern Conference semifinal series against the Boston Celtics, the Toronto Raptors revealed their key to getting through to the next round of the playoffs: riding their Big Three.

Kyle Lowry, Pascal Siakam and Fred VanVleet each played well north of 40 minutes, including the entire second half, in the Raptors’ 100-93 victory in Game 4 on Saturday. The trio will be similarly counted upon as Toronto looks to keep its momentum rolling in Game 5 on Monday night near Orlando.

The Raptors had been behind 2-0 in the series before winning Thursday’s Game 3 on a miracle buzzer-beater from OG Anunoby with 0.5 seconds remaining. Game 4 was less of a hassle, as Toronto entered the fourth quarter with an eight-point lead that it never seemed in danger of losing.

“I think we can always get to another level,” said Siakam, who had his best game of the series with 23 points and 11 rebounds. “I feel like we can always do that … and once we have that we’re a pretty special team.”

Lowry was excellent for the second straight game, scoring 22 points to go with 11 rebounds. VanVleet nailed five 3-pointers among his 17 points as Toronto hit 17 of its 44 chances from deep (38.6 percent) after averaging 28.3 percent over the first three games of the series.

“There’s nothing to be resting for, there’s no tomorrow,” said VanVleet of his added workload. “There’s no way to manage it, and coach is putting his trust in us and communicating to a level where if you need a rest you get one. … Right now I think he’s rolling with the big guns, and that’s the way that we like it.”

Having lost their commanding 2-0 lead in the series, the Celtics will be looking for more out of their star players. Kemba Walker, for one, said he needed to be more aggressive after taking just nine shots in Saturday’s loss.

“That’s unacceptable on my behalf, to be honest,” Walker said.

Walker hit just 1 of 6 six chances from three as part of a larger team issue for Boston, which made just 7 of 35 shots from behind the line (20.0 percent) during the game.

“We just really missed,” Walker said. “We missed a lot of open ones that we know we can make. Like I said, we gotta make them. We have to make shots. When guys get shots, when guys are open, we gotta knock them shots down.”

Jaylen Brown, in particular, struggled with 14 points on 4-of-18 shooting. He missed his first nine shots from three before finally getting a make in the fourth quarter.

The Celtics expect to get starting forward Gordon Hayward back in the bubble Sunday night for the first time since he sprained his ankle in Game 1 of their first-round playoff series. Coach Brad Stevens said Hayward, who needs to quarantine four days, still won’t play “anytime soon.”