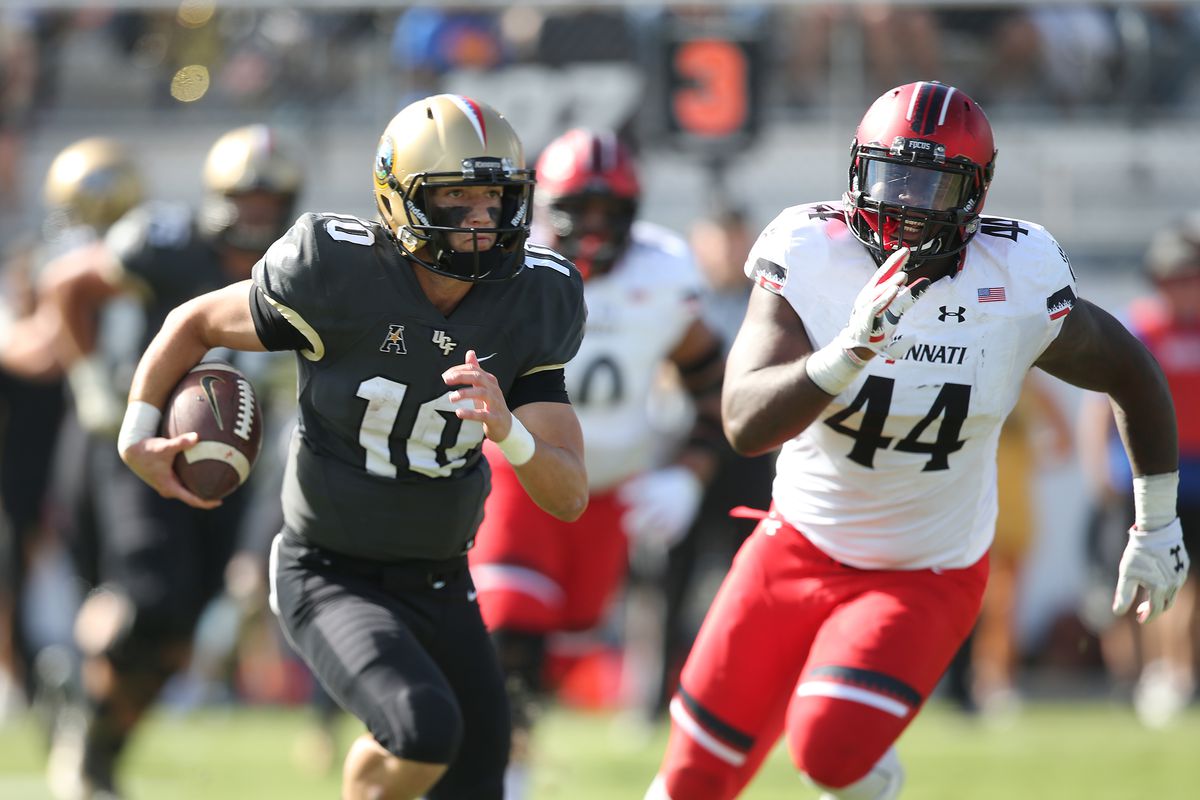 CINCINNATI (AP) A Midwest thunderstorm was the only thing that slowed UCF the last time the Knights came to Cincinnati. Clear skies are forecast when they return with a focus on extending a long streak.

The No. 18 Knights (4-1, 1-0 American Athletic) are looking for their 20th straight league win on Friday night when they face Cincinnati (3-1, 0-0). The Bearcats are aiming to give a respectable performance against the league’s two-time defending champion.

It’s quite a night for both of them.

Playing as a ranked team for the first time in four years, the Knights won 51-23 in a game halted after three quarters because of a severe storm. UCF scored every time it had the ball – seven touchdowns and a field goal – while improving to 4-0 for the first time since 1988, when it was in Division II.

The rematch in Orlando last year was lopsided as well. After Cincinnati recovered a fumble for a touchdown, the Knights pulled away to a 38-13 win, giving the Bearcats one of only two losses for the season.

Cool temperatures and clear skies are predicted for their rematch Friday night in Cincinnati.

”It’ll be faux fall up there for our guys,” coach Josh Heupel said. ”It’ll be a great night. Expect an electric atmosphere. It’s going to be fun.”

Some things to watch at Nippert Stadium:

Cincinnati’s cornerbacks have struggled to keep up with UCF’s receivers. The Knights’ overall speed and up-tempo offense have been a problem. Fickell started preparing his players for it during camp. How well they keep up will likely determine the outcome. UCF has scored at least 30 points in 31 consecutive games, the longest such streak in the FBS since 1936. Freshman quarterback Dillon Gabriel leads the conference in pass efficiency rating.

”I don’t know anybody that’s quite the tempo that UCF is, so it’s hard to simulate,” Fickell said. ”Across the board, it is unique.”

The Knights throttled Cincinnati quarterback Desmond Ridder in their lopsided win last season, holding him to 11 of 26 for 127 yards. The Bearcats are coming off a 52-14 win at Marshall that featured four touchdown passes by Ridder, who will be facing a much tougher defensive line this time around. UCF’s line was impressive during a 56-21 win over UConn last week.

”Defensively, I was pleased with a lot of the things we did,” Heupel said. ”They were disruptive. They were in the backfield both in the run game on an third down in particular, causing havoc on the quarterback.”

UCF expects the Bearcats to try to slow down the run game and put pressure on Gabriel to have a big game. The true freshman has thrown a league-leading 14 touchdown passes.

”They constrict everything, man,” Heupel said. ”They take the air out of it. They’re going to play press coverage, try to make it difficult to run the football. That’s what they did a year ago.”

The Bearcats played their worst game of last season at UCF. They have another chance to show they’ve closed the gap in prime time. Fickell has been trying to get his players to relax and enjoy the spotlight. They opened the season by beating UCLA 24-14 in a Thursday night game at Nippert Stadium.

”We keep trying to remind these guys,” Fickell said. ”We haven’t had these stages – last year against UCF, this year against UCLA. The atmosphere is what you love about college football. You find a way to enjoy it rather than put pressure on yourself, which in turn makes it more difficult to respond.”