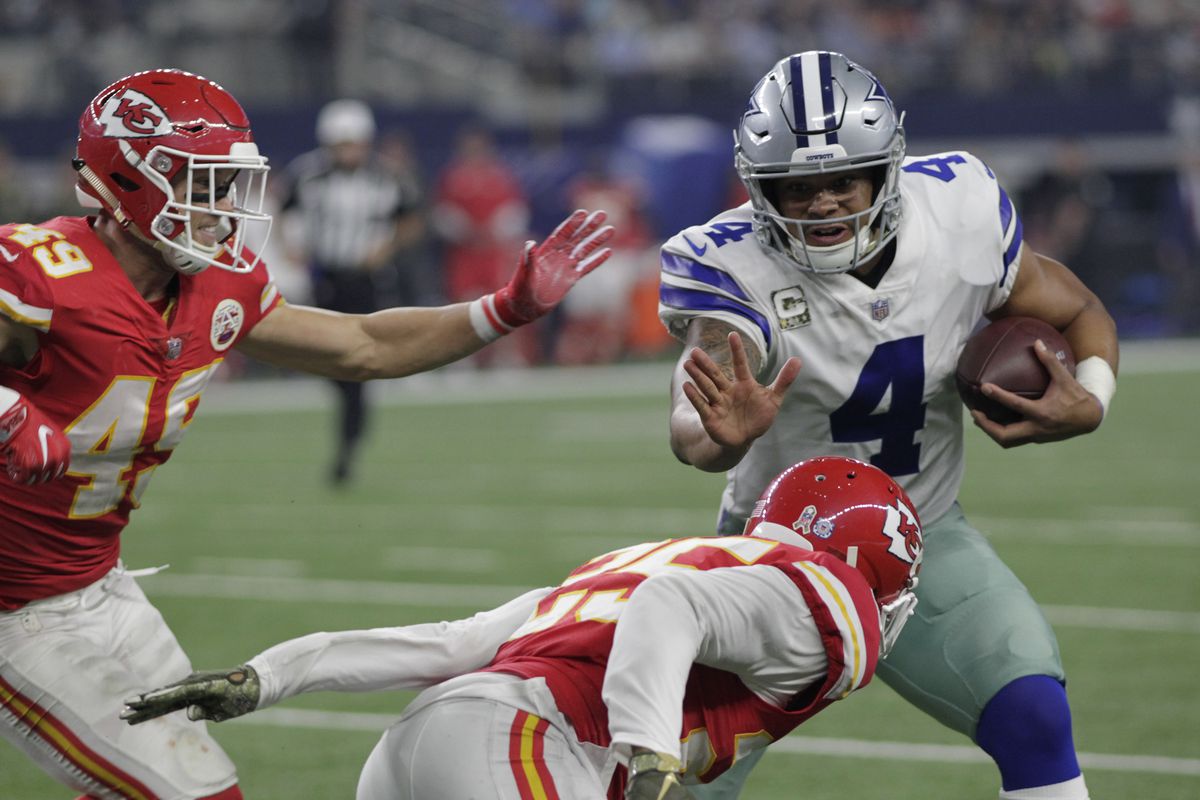 By now, Patrick Mahomes knows exactly what he is going to see from NFL defenses.

Two-high coverages have been common, disguised or not, in trying to diffuse Mahomes and the Kansas City Chiefs (6-4). That probably won’t change Sunday when they play host to the Dallas Cowboys (7-2).

Kansas City of the AFC West is favored by 2.5 points over Dallas of the NFC East.

The Cowboys will be without standout receiver Amari Cooper (COVID-19 protocols), but in this matchup Mahomes knows his ability to solve defensive wrinkles is key.

“They’re probably going to do some type of different two-high stuff. They’re not going to sit back and give us the exact same coverage every single time,” Mahomes said. “They’re going to try to find ways to confuse me and confuse this offense. We’ve got to make in-game adjustments and take what’s there.”

Kansas City did that with slick effectiveness last week when it attacked the Las Vegas Raiders for a whopping 516 yards, including 406 yards and five touchdowns through the air from Mahomes. The 41-14 romp thrust the Chiefs into first place in the AFC West.

“The run game helped that,” Chiefs coach Andy Reid said of the complimentary football Darrel Williams fueled with a mix of runs and receptions (20 touches) for 144 yards. “It’s about being physical, and the better you are in the run game, the better you can be with play-action.”

The running game will receive a boost as Kansas City activated running back Clyde Edwards-Helaire off injured reserve on Saturday. Edwards-Helaire has missed the past five games with an MCL sprain in his left knee, sustained during a loss to the Buffalo Bills on Oct. 10.

In five starts this year, the 22-year-old has rushed for 304 yards and no touchdowns and has eight receptions for 61 yards and two scores. The first-round pick in 2020 out of LSU gained 1,100 yards from scrimmage (803 rushing, 297 receiving) and scored five touchdowns (four rushing, one receiving) in 13 games as a rookie.

Could the Chiefs be regaining the form that landed them in each of the past three AFC Championship Games and two straight Super Bowls?

An answer to that question cannot be based solely on Mahomes’ ability to finally exert patience and take shorter gains underneath with opponents guarding against the Chiefs’ deep threats.

The Kansas City defense plays into the equation, especially after allowing 12.7 points on average during the current three-game winning streak, though the Chiefs are tied for 31st in yards allowed per play (6.2). Dallas just happens to rank first offensively with a 6.3-yard average per play.

“They’re the No. 1 offense in the league in a few different categories,” Reid said before singling out Dak Prescott and Ezekiel Elliott. “They’re both good, Pro Bowl football players, along with their cast there … and their coordinator (Kellen Moore) and head coach (Mike McCarthy) are real good offensive minds.”

While recognizing Mahomes’ ability to extend plays, McCarthy didn’t mind pointing out the explosive potential of the matchup by noting “we’re not a dink-and-dunk offense.”

Not with Prescott connecting on 70.3 percent of his attempts to an array of talented receivers led by CeeDee Lamb with a 15.4-yard average per catch. The Cowboys are coming off their first 40-point win since 2000, a 43-3 rout of the Atlanta Falcons.

The loss of Cooper will hurt. The four-time Pro Bowler has 44 receptions for 583 yards and five touchdowns in nine games this season.

Dallas’ Trevon Diggs has been tremendous in coverage, leading the league with eight interceptions, including two touchdowns. The Chiefs have committed 20 turnovers — the second-highest total in the league — with Mahomes having thrown 10 interceptions.

“This is an important game,” McCarthy said. “It’s about getting a road win. I think we know where we are. And I know where they want to go, so you’re going to see a clash of two really good football teams.”

Offensive tackle Lucas Niang (ribs) remains out for Kansas City. The Chiefs will continue to monitor the progress of running back Clyde Edwards-Helaire (knee), who returned to practice last week and might be activated to play against Dallas.