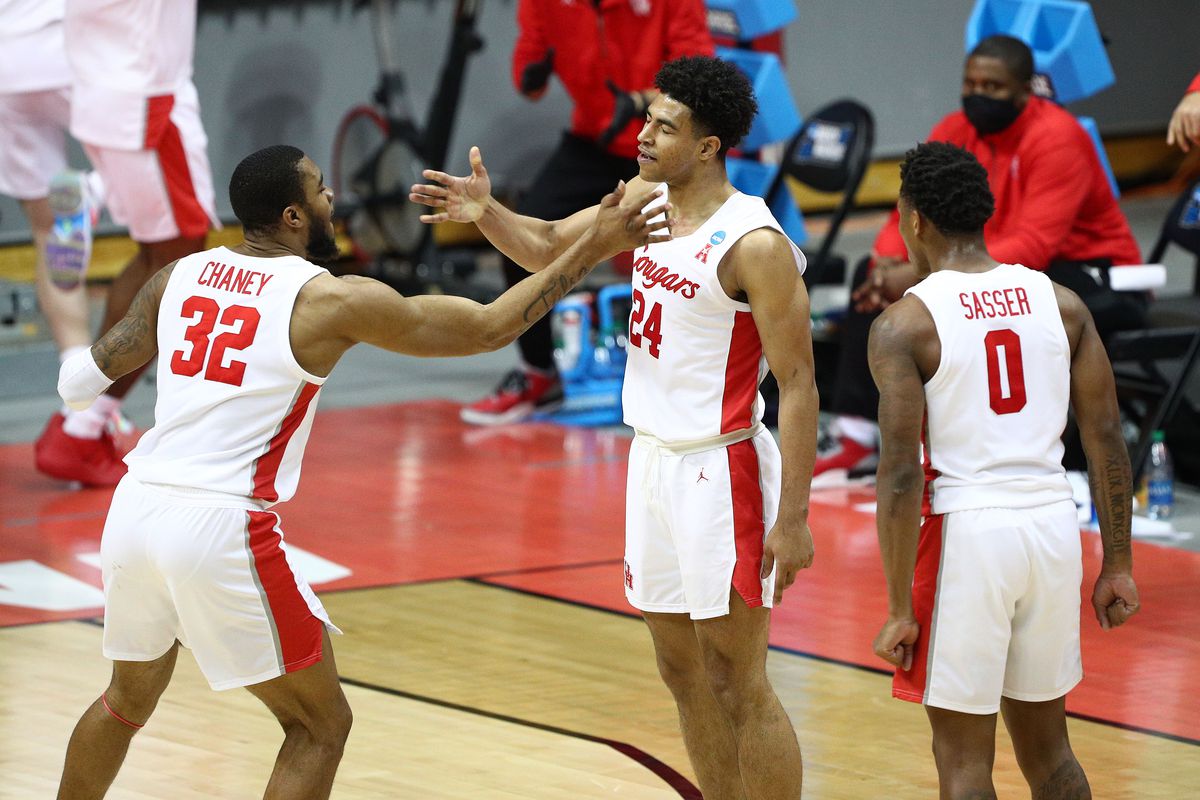 The Houston Cougars have waited nearly four decades to revisit their past glory as one of the premier college basketball programs in the nation and after their dominating defensive performance on Saturday at Hinkle Fieldhouse, they need one more win to reach that plateau.

The second-seeded Cougars (27-3) rolled to a 62-46 victory over 11th-seeded Syracuse in the second Midwest Region semifinal to set a date opposite No. 12 seed Oregon State (20-12) on Monday for a spot in the Final Four. Houston has made five previous trips to the Final Four, including three consecutive appearances from 1982-84 when it reached its pinnacle under coach Guy Lewis.

With so much at stake in the present at Indianapolis, it remains difficult for the Cougars to avoid looking back in time. Houston coach Kelvin Sampson did his best to toe the line between the then and now.

Houston has benefited from a fortunate draw, with the Beavers — following No. 10 Rutgers and Syracuse — set to become the third double-digit seed it will face during this NCAA Tournament.

Still, the Cougars have not wasted the opportunity. Against Syracuse and its vaunted zone defense, Houston exercised patience offensively while flexing its muscle defensively and on the glass. The latter two have become program tenets under Sampson, and against Syracuse, the Cougars produced a plus-9 rebounding edge while limiting the Orange to just 28 percent shooting.

The current program culture has come to mean as much as past program glory.

“Obviously we know the excitement we’re bringing to the city of Houston and to the university,” Cougars senior guard DeJon Jarreau said. “We’re very happy for that. But we have a business to accomplish. We have a mission to accomplish. And we’re just trying to do our best to try to go as far as we can.

“We know we’re making history. And like I’ve been saying, we are just approaching it as a business standpoint, just going out, executing our game plan, and playing to the great culture that we have here.”

Oregon State continued its stunning postseason run by eliminating eighth-seeded Loyola Chicago 65-58 in the first Midwest Region semifinal. After finishing sixth in the Pac-12, the Beavers needed to win that postseason tournament just to qualify for the NCAA Tournament.

Much has been made of the Beavers’ unexpected turn this postseason starting with wins over UCLA, Oregon and Colorado — all NCAA Tournament teams — in the Pac-12 tournament. Oregon State has continued that momentum by ousting three higher-seeded teams since claiming an automatic bid in the NCAA Tournament, with talk of earning overdue respect now the narrative.

“The guys pay attention to all the media and, as much as we try to steer them away from it, the social media, in particular,” Beavers coach Wayne Tinkle said. “They just want to keep riding the wave. We did use the 12th — during the year when we were picked 12th in the league.

“Really haven’t made a big deal about the 12th seed in the tournament. We were thrilled to be here. But we knew we had a mission. I don’t want to throw too much at them. They’ll see it. They’ll see it. And it’s cool. But we just gotta really keep our feet on the ground, stay humble and stay hungry, keep grinding away.”

The Beavers are certainly aware of the chatter surrounding their current run to the Elite Eight, the program’s first extended tournament run since a berth in the 1982 West Region final. Oregon State last reached the Final Four in 1963, and with history within reach, the Beavers have acknowledged that they picked an opportune time to live up to their own expectations.

The results weren’t there during the season. That fact doesn’t mean the Beavers didn’t believe.

“I think even during the regular season, going into games we’re pretty confident in our abilities as a team,” Beavers senior guard Ethan Thompson said. “But having the wins to back it up, winning six straight … going into these games is just more confidence, really, believing in each other and trusting each other to get another win. And our guys don’t want to stop playing.”