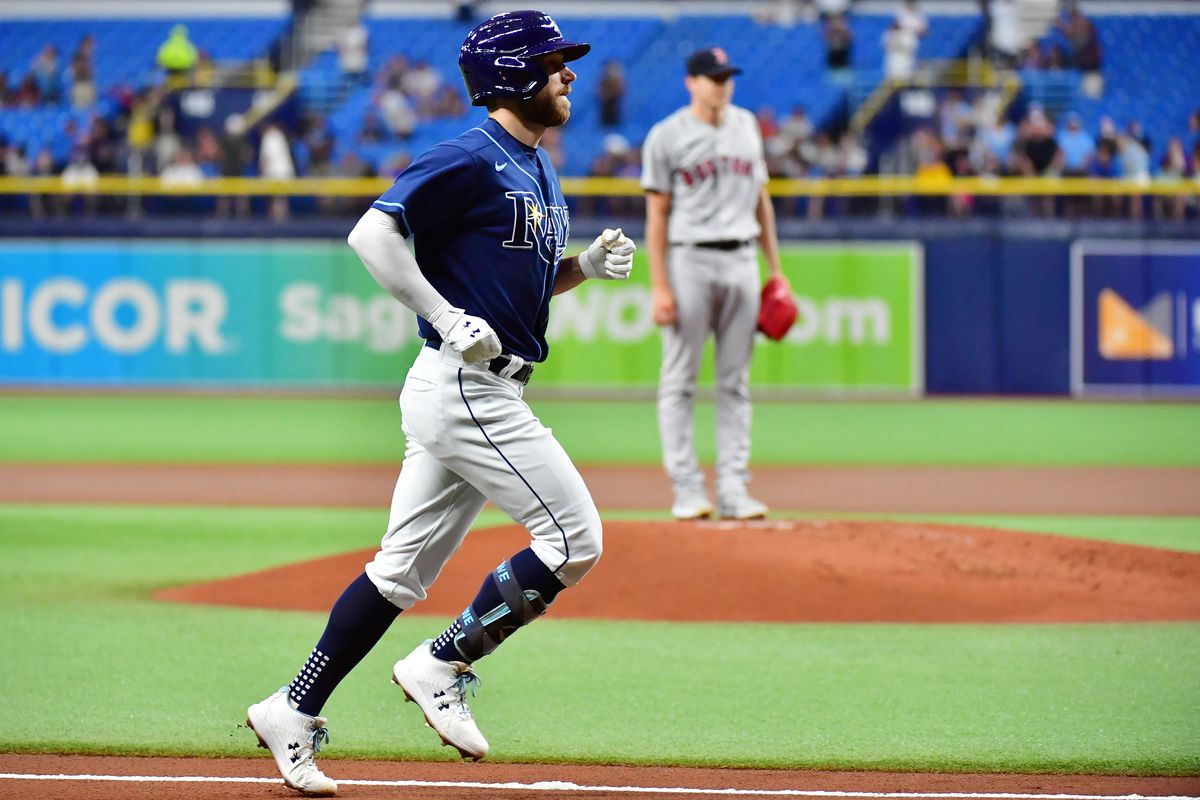 One swing and a timely bounce have put the Boston Red Sox on the verge of winning their American League Division Series against the Tampa Bay Rays heading into Game 4 of the best-of-five series on Monday night.

Christian Vazquez hit a walk-off two-run home run in the 13th inning to lift the Red Sox past the Rays 6-4 in Game 3 on Sunday to grab a 2-1 series lead. The homer came after a controversial ground-rule double call in the top of the inning prevented the Rays from scoring a go-ahead run.

Yandy Diaz was held at third base after Kevin Kiermaier drove a two-out ground-rule double in the 13th that bounced off the short wall in right-center field and bounced out of play off Red Sox right fielder Hunter Renfroe.

Per Rule 5.05(a)(8) of MLB’s umpire manual, “any bounding fair ball is deflected by the fielder into the stands, or over or under a fence on fair or foul territory, in which case the batter and all runners shall be entitled to advance two bases.”

“It’s in the rule book. It’s a ground-rule double. There’s no discretion,” crew chief Sam Holbrook reaffirmed after the game.

Diaz reached on a one-out single and likely would have scored easily from first base had the ball not been knocked out of play.

“I’m still — I’m just in awe right now,” Kiermaier said. “You know, that’s the ruling. The umpires explained it to me, so I can’t go against that. The rules are what they are. But man, that’s a heartbreaker. I can’t believe that happened or we don’t get the chance to score right there.”

Boston has won back-to-back games in the series after a 14-6 thumping of the Rays in Game 2 on Friday night at Tampa Bay. The Red Sox can advance to their first AL Championship Series since winning the World Series in 2018 with a win on a special day for their city.

Game 4 coincides with the rescheduled date for the twice-postponed 125th Boston Marathon. The Red Sox traditionally host a late-morning game on the day of the marathon — although ‘Marathon Monday’ typically occurs on Patriots’ Day in April.

Boston will wear its yellow City Connect jerseys that were designed to resemble the jackets of marathon runners.

“It’s a special day for everybody here, I know that,” Cora said. “I think Monday with us playing in a playoff game and obviously what’s going on during the day, I can’t even imagine the feelings of the people here.”

Down but not out, the defending AL champion Rays remain confident in their abilities to force a Game 5 on Wednesday in St. Petersburg, Fla.

“I told the guys after the game in the clubhouse, ‘If there’s any team who can (overcome this), it’s us’ — and you have to believe that and come out ready to win a ballgame, do whatever it takes,” Kiermaier said.

Rodriguez will look to bounce back after allowing two runs in just 1 2/3 innings in Boston’s 5-0 loss in the series opener on Thursday.